Galion Motor Graders have long been the gold standard in reliability for articulated motor graders worldwide. These graders have driven progress in Africa for many years and continue to do so due to their reliability.

From the Wikipedia article –

Galion Iron Works is the name of the company that built Galion brand construction equipment. World famous for their graders that shaped the roads of the world, a saying emerged that “All roads lead to Galion.” They also manufactured rollers, cranes, asphalt millers and even riding sqeegees among other machines.

Galions drove progress across the world, and the parent company was purchased by Dresser Industries in 1974. After that in the 1980’s the name Galion was dropped, and replaced with Dresser.

Note is worth looking for both Galion Spares and Dress Spares when searching online for Galion spare parts.

In the late 90’s, the Galion name was revived and the 3 main articulated gallon models were rebadged and renumbered to fall into line with the parent companies series.

What is a grader?

A motor grader, also known as a road grader, patrol, or maintainer, 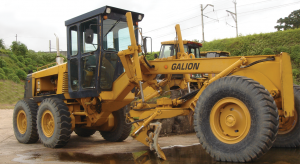 is a piece A variety of attachments convert the motor grader into a more versatile machine, enabling the machine to do things such as dig shallow holes. The attachment of an elevating conveyor enables the machine to take loose material from the trailing end of its blade, elevate it, and cast it into a hauling unit of heavy machinery used to create a smooth, wide, flat surface.

Traditionally, the grader is used for road maintenance—its main function is to flatten surfaces before the application of asphalt. Presently, these machines are also commonly used for fine grading, spreading, and earthmoving. They can be used for clearing debris and bushl.

At Queensburgh Plant Sales we source high quality new spares, used spares and reconditioned spares for all makes of motor graders as well as any other heavy plant.